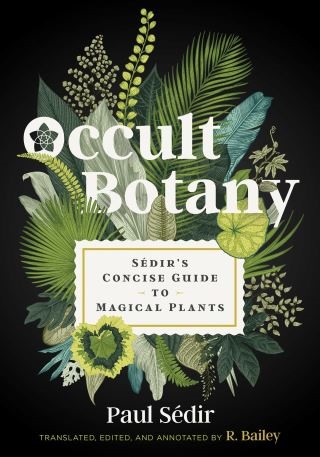 • Includes a dictionary of nearly 300 magical plants with descriptions of each plant’s scientific name, common names, elemental qualities, ruling planets, and zodiacal signatures, with commentary on medico-magical properties and uses

• Explores methods of phytotherapy and plant magic, including the Paracelsian “transplantation of diseases,” ritual pacts with trees, the secret ingredients of witches’ ointments, and the composition of magical philters

• Explains the occult secrets of phytogenesis, plant physiology, and plant physiognomy (classification of plants according to the doctrine of signatures)

Merging the scientific discipline of botany with ancient, medieval, and Renaissance traditions of occult herbalism, this seminal guide was first published in French in 1902 as a textbook for students of Papus’s École hermétique and sparked a revival in the study of magical herbalism in early twentieth-century France.

Author Paul Sédir, pseudonym of Yvon Le Loup (1871-1926), explains the occult secrets of phytogenesis (the esoteric origin and evolutionary development of the plant kingdom), plant physiology (the occult anatomy of plants), and plant physiognomy (classification of plants according to the doctrine of signatures). Unveiling the mysteries behind planetary and zodiacal attributions, he provides readers with the keys to make their own informed determinations of the astral properties of plants. Moving from theory into practice, Sédir explores various methods of phytotherapy and plant magic, including the Paracelsian “transplantation of diseases,” the secret ingredients of witches’ ointments, and the composition of magical philters.

In the third section of the book, Sédir offers a dictionary of magical plants that covers nearly 300 plant species with descriptions of their astral signatures, occult properties, and medico-magical uses. Compiled from an array of rare sources and esoterica, this classic text includes a wealth of additional materials and supplemental charts and diagrams drawn from Sédir’s occult colleagues, all of whom adopted and expanded upon Sédir’s pioneering system of plant correspondences.

Paul Sédir: Paul Sédir, pseudonym of Yvon Le Loup (1871-1926), was a pivotal figure of the fin-de-siècle French occult revival. He was a professor at the École hermétique and Faculté des sciences hermétiques in Paris under the directorship of Papus, his first spiritual mentor. He practiced magic with the alchemist Albert Poisson and was initiated into almost all of the secret societies that occult Paris had to offer. Under the name Tau Paul, he was consecrated bishop of Concorezzo in the Église gnostique de France. He wrote widely on traditions of magic, mysticism, and esotericism, publishing over twenty books in French.