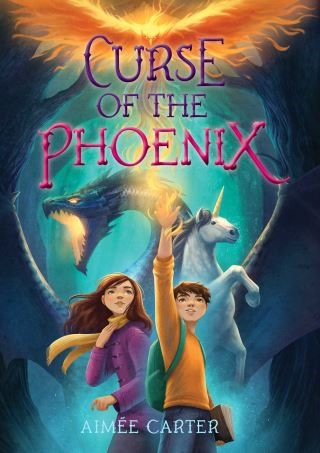 Curse of the Phoenix

The creatures of legend are real—and it’s up to twins Zac and Lu to save them in this fun-filled middle grade adventure perfect for fans of Fablehaven and The Hotel Between.

Twins Zac and Lu grew up on their mother’s stories of the Wildewoods, an imaginary land where mythical beasts roam free. These creatures fill the pages of Zac’s sketchbooks and inspire Lu’s love of animals, and on most days, they’re the only thing the twins have in common.

When their mother dies, a heartbroken Lu and Zac are shipped off to England to spend the summer with relatives they’ve never met. But it doesn’t take the twins long to uncover the incredible secret tucked away in the forest behind their ancestral home: their mother’s wonderful tales about unicorns and dragons and centaurs weren’t make-believe after all. Their family serves as keepers of the Wildewoods, the last place on earth where these mythical creatures can live safe from human harm.

But there are also many dangers in these lands—as well as a terrible curse. When Zac and Lu fall victim to it, their only hope is finding the very last living phoenix left in the world. But will breaking the curse mean the end of the Wildewoods?

Aimée Carter: Aimée Carter is a graduate of the University of Michigan and the author of over a dozen books. After two successful fantasy series for young adults, she turned her attention to middle grade readers with Simon Thorn, now a #1 internationally bestselling series under the name Animox. Visit her at AimeeCarter.com.