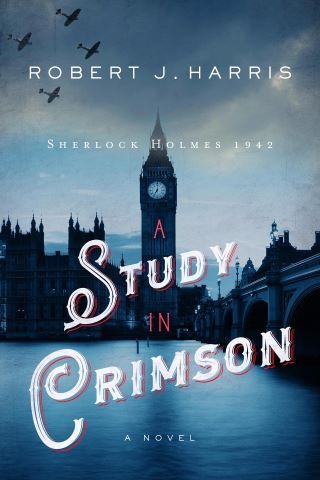 A Study in Crimson

A killer going by the name of “Crimson Jack” is stalking the wartime streets of London, murdering women on the exact dates of the infamous Jack the Ripper killings of 1888. Has the Ripper somehow returned from the grave? Is the self-styled Crimson Jack a descendant of the original Jack—or merely a madman obsessed with those notorious killings?

In desperation Scotland Yard turn to Sherlock Holmes, the world's greatest detective. Surely he is the one man who can sift fact from legend to track down Crimson Jack before he completes his tally of death. As Holmes and the faithful Watson tread the blacked out streets of London, death waits just around the corner.

Inspired by the classic film series from Universal Pictures starring Basil Rathbone and Nigel Bruce, which took Sherlock Holmes to the 1940s, this is a brand-new adventure from a talented author who brilliantly evokes one of mystery fiction’s most popular characters.

Robert J. Harris: Robert J. Harris was born in Scotland and studied at the University of St Andrews where he graduated with first class honors. He is the designer of the bestselling fantasy board game Talisman. His first novel, The Thirty-One Kings—inspired by the classic John Buchan thriller The Thirty-One Steps—was acclaimed by critics and readers alike. Robert lives in St Andrews, Scotland.