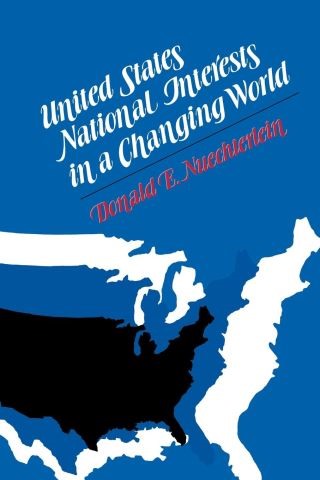 Although the term national interest has long been used in reference to the foreign policy goals of nations, there has been no generally agreed upon definition of the concept; as a result, Donald E. Nuechterlein contends, there has been a tendency for foreign policy to be determined by institutional prejudice and past policy rather than by a systematic assessment of national interests. By what criterion does a President decide that a given interest is or is not vital-that is, whether he must contemplate defending it by force if other measures fail?

In this study Nuechterlein offers a new conceptual framework for the analysis of foreign policy decisions; resting on more precise definitions and distinguishing among the degrees of interest that the United States perceives in the range of foreign policy issues it faces. He also deals with the constitutional problem of checks and balances between the Presidency and Congress in setting the goals of foreign policy, and the influence of private interest groups and the media on the definition of national interest. Underlining the need for constant reassessment of priorities in a rapidly changing international environment, Nuechterlein illustrates his analysis by drawing on the American experience in foreign affairs since World War II.

A case study of the American involvement in Southeast Asia describes how six presidents, beginning with Franklin Roosevelt, viewed United States interests there and the conclusions each drew in terms of policy tools to defend those interests in Vietnam. Finally, he assesses what the future vital interests of the United States are likely to be in light of the shifting balance of world power, and the growing importance of international economics.