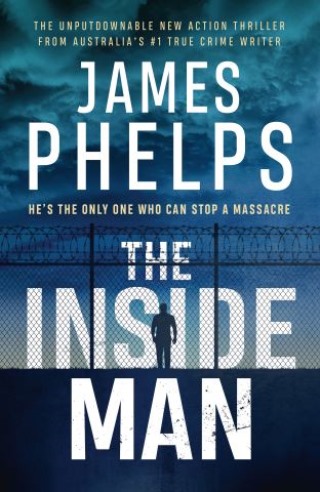 He's the only one who can stop a massacre ... The unputdownable action thriller from Australia's no.1 true crime writer.

Riley Jax, convicted murderer. Once a promising engineer in the army, he lost everything in a single night when he killed a man – an act he cannot remember.

It's a devastating gap in an otherwise perfect memory.

Now he's facing a new life, one behind bars, where he has to learn a whole different set of rules and only the toughest survive.

And as a series of deadly bombings rocks the outside world, the only man who might be able to find the truth behind the conspiracy ... is on the inside.

Australia's no.1 true crime writer lets his imagination off the leash in this unputdownable action thriller for all fans of Matthew Reilly, Lee Child and David Baldacci.

James Phelps: James Phelps is an award-winning senior reporter for Sydney's The Daily Telegraph and The Sunday Telegraph. He began as an overnight police-rounds reporter before moving into sport, where he became one of Australia's best news-breaking rugby league journalists. James was then appointed News Corp Australia's Chief National Motorsports Writer and travelled the world chasing Formula 1 stories, as well as covering Australia's V8 Supercar races. As well as writing bestselling and critically acclaimed biographies of Dick Johnson and Johnathan Thurston, James established himself as Australia's number-one true crime writer with his bestselling prison series, including Australia's Hardest Prison, Australia's Most Murderous Prison, and Australia's Toughest Prisons. His most recent books are Australian Heist (2018), a dramatic retelling of the true story behind Australia's largest gold robbery, and Australian Code Breakers (2020), a gripping account of how Australian cryptographers helped bring about the most vital Allied naval victory of World War I.