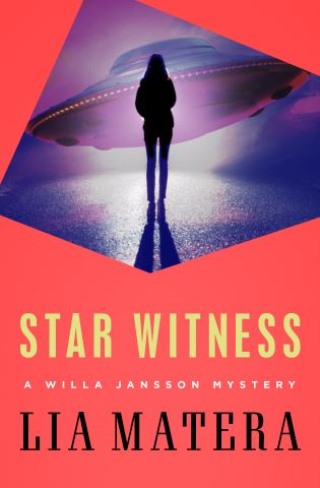 A plucky lawyer’s out of her element when she investigates a suspicious death that’s out of this world in this mystery by the author of Last Chants.

Overworked San Francisco attorney Willa Jansson’s ready to go on her three-week vacation and relax on the beach in Mexico. But before she can leave the office, she gets a phone call from a friend whom she owes a favor . . .

Willa heads to Santa Cruz to take on what at first sounds like a vehicular manslaughter and felony hit-and-run case. Alan Miller’s Fiat fell on top of Francis Addenaur’s Buick in a field of Brussels sprouts. The problem is the Fiat left no tracks in the field and Miller wasn’t in his car. He says he was abducted by aliens

As Willa begins examining crop circles and subpoenaing UFO experts, she realizes this case could ruin her career. But with an angry widow packing heat and mysterious black helicopters circling the sky, discovering the truth feels like a matter of life or death . . .

“Matera’s latest mystery is a hoot. It will drive the Pentagon non-UFO believers crazy and probably end up being the inspiration for an X-Files episode. . . . This fast-moving tale is peppered with eccentric characters, snappy dialogue and a creative plot.” —San Francisco Examiner & Chronicle

“Matera has proved more than once that she is the master when it comes to dabbling in Northern California flakiness for her mystery plots. This time she focuses on alien abduction. . . . Matera cleverly walks the line here between milking the material for humor and taking it all too seriously. . . . Mystery fans can’t fail to be entertained.” —San Jose Mercury News

Lia Matera: Lia Matera is the Edgar, Anthony, and Macavity Award–nominated author of nine novels. A graduate of UC Hastings College of the Law, where she was editor in chief of the Hastings Constitutional Law Quarterly, Matera was a teaching fellow at Stanford Law School before becoming a full-time writer of legal mysteries. She lives in Santa Cruz, California.