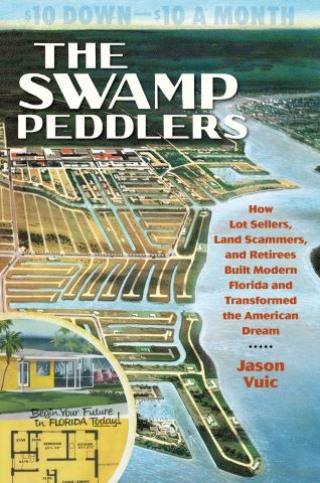 Florida has long been a beacon for retirees, but for many, the American dream of owning a home there was a fantasy. That changed in the 1950s, when the so-called "installment land sales industry" hawked billions of dollars of Florida residential property, sight unseen, to retiring northerners. For only $10 down and $10 a month, working-class pensioners could buy a piece of the Florida dream: a graded home site that would be waiting for them in a planned community when they were ready to build. The result was Cape Coral, Port St. Lucie, Deltona, Port Charlotte, Palm Coast, and Spring Hill, among many others—sprawling communities with no downtowns, little industry, and millions of residential lots.

In The Swamp Peddlers, Jason Vuic tells the raucous tale of the sale of residential lots in postwar Florida. Initially selling cheap homes to retirees with disposable income, by the mid-1950s developers realized that they could make more money selling parcels of land on installment to their customers. These "swamp peddlers" completely transformed the landscape and demographics of Florida, devastating the state environmentally by felling forests, draining wetlands, digging canals, and chopping up at least one million acres into grid-like subdivisions crisscrossed by thousands of miles of roads. Generations of northerners moved to Florida cheaply, but at a huge price: high-pressure sales tactics begat fraud; poor urban planning begat sprawl; poorly-regulated development begat environmental destruction, culminating in the perfect storm of the 21st-century subprime mortgage crisis.

Jason Vuic: Jason Vuic is the author of The Yucks!: Two Years in Tampa with the Losingest Team in NFL History and The Yugo: The Rise and Fall of the Worst Car in History.