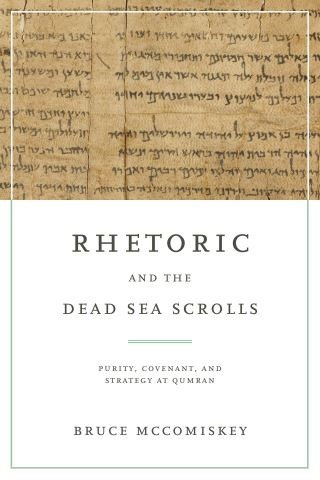 Rhetoric and the Dead Sea Scrolls

Purity, Covenant, and Strategy at Qumran

Discovered in 1947, the Dead Sea Scrolls are a collection of ancient Israelite documents, many of which were written by a Jewish sectarian community at Qumran living in self-exile from the priesthood of the Second Temple. This first book-length study of the rhetoric of these texts illustrates how the Essenes employed different rhetorics over time as they struggled to understand God’s word and their mission to their people, who seemed to have turned away from God and his purposes.

Applying methods of rhetorical analysis to six substantive texts—Miqṣat Maʿaśeh ha-Torah, Rule of the Community, Damascus Document, Purification Rules, Temple Scroll, and Habakkuk Pesher—Bruce McComiskey traces the Essenes’ use of rhetorical strategies based on identification, dissociation, entitlement, and interpretation. Through his analysis, McComiskey uncovers a unique, fascinating story of an ancient religious community that had sought to reintegrate into Temple life but, dejected, instead established itself as the new covenant people of God for this world, only to turn ultimately to a trust in a metaphysical afterlife.

Presenting forms of ancient Jewish rhetoric largely uninfluenced by classical rhetoric, this book broadens our understanding of human and religious rhetorical practice, even as it provides new insight into the events that led to the emergence of the Talmudic period. Rhetoric and the Dead Sea Scrolls will be useful to scholars working in the fields of religious rhetoric, Jewish studies, and early Christianity.

Bruce McComiskey: Bruce McComiskey is Professor of English and Director of Professional Writing at the University of Alabama at Birmingham. He is the author of Teaching Composition as a Social Process; Gorgias and the New Sophistic Rhetoric; Dialectical Rhetoric; and Post-Truth Rhetoric and Composition.