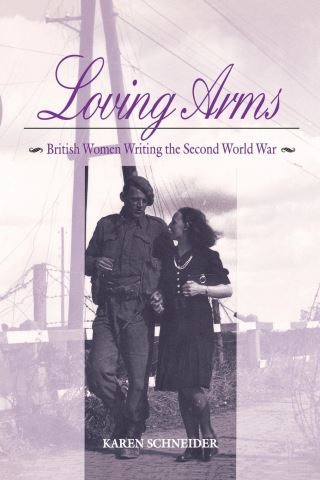 Loving Arms examines the war-related writings of five British women whose works explore the connections among gender, war, and story-telling. While not the first study to relate the subjects of gender and war, it is the first within a growing body of criticism to focus specifically on British culture during and after World War II.

Evoking the famous "St. Crispin's Day" speech from Henry V and then her own father's account of being moved to tears on V-J Day because he had been too young to fight, Karen Schneider posits that the war story has a far-reaching potency. She admits—perhaps for all of us—that such stories "had powerfully shaped my consciousness in ways I could not completely resist."

How a story is narrated and by whom are matters of no small importance. As widely defined and accepted, war stories are men's stories. If we are to hear an "other" story of war, then we must listen to the stories women tell. Many of the war stories written by women insist that war is not the condition of men but rather the condition of humanity, beginning with relations between the sexes.

For the five women whose work is examined in Loving Arms—Stevie Smith, Katharine Burdekin, Virginia Woolf, Elizabeth Bowen, and Doris Lessing—this latter point was particularly relevant. Their positions as women within a patriarchal, militarist culture that was externally threatened by an overtly fascist one led to an acute ambivalence, says Schneider. Though all five women perceived the war from substantially different perspectives, each in her own way exposed and critiqued the seductive power of war and war stories, with their densely interwoven tropes of masculinity and nationalism. Yet these writers' conflicting impulses of loyalty to England and resistance to the war betray their ambivalence.

Loving Arms will interest students of twentieth-century British literature and culture, gender studies, and narratology. Even today, we maintain an unabated love affair with the war story. But unless we listen to what the women had to say fifty years ago, we are doomed to hear only "the same old story."