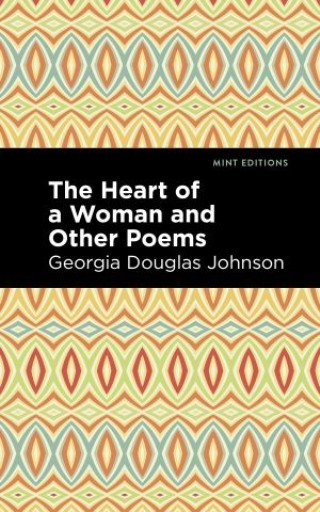 The Heart of a Woman and Other Poems

The Heart of a Woman and Other Poems (1918) is a collection of poetry by Georgia Douglas Johnson. Marking Johnson’s debut as one of the leading poets of the Harlem Renaissance, The Heart of a Woman and Other Poems is an invaluable work of African American literature for scholars and poetry enthusiasts alike. Comprised of Johnson’s earliest works as a poet, the collection showcases her sense of the musicality of language while illuminating the experiences of African American women of the early twentieth century. “The heart of a woman goes forth with the dawn, / As a lone bird, soft winging, so restlessly on.” Recalling Paul Laurence Dunbar’s classic poem “Sympathy,” which immortalizes the African American experience with the line “I know why the caged bird sings,” the title poem of Johnson’s collection compares the heart to a bird. Musical and dreamlike, Johnson’s poem envisions “the heart of a woman” as it “enters some alien cage in its plight, / And tries to forget it has dreamed of the stars / While it breaks, breaks, breaks on the sheltering bars.” With each repetition of “breaks,” the reader can feel the restlessness and fear of the bird as it beats its wings against its cage, the heart as it beats against the “sheltering bars” of the ribs. In this poem, and throughout the collection, Johnson shows an efficiency with language uncommon to many poets, let alone one making her debut. With a beautifully designed cover and professionally typeset manuscript, this edition of Georgia Douglas Johnson’s The Heart of a Woman and Other Poems is a classic of African American literature reimagined for modern readers.

Georgia Douglas Johnson (1880-1966) was an African American poet and playwright. Born in Atlanta, she excelled in school from a young age, learning to read, write, and play violin. She graduated from Atlanta University’s Normal School in 1896 before working briefly as a teacher Marietta, Georgia. In 1902, having decided to become a professional musician, she enrolled at Oberlin Conservatory of Music, where she studied music theory and learned the art of composition. She later returned to Atlanta, marrying prominent lawyer and Republican party member Henry Lincoln Johnson, with whom she had two sons. After moving to Washington, D.C. in 1910, she embarked on a literary career against her husband’s wishes, submitting poems to journals around the country. She published her first collection, The Heart of a Woman and Other Poems (1918) to modest acclaim and continued to grow her reputation with poems in The Crisis, the journal of the NAACP edited by W.E.B. Du Bois. Following her husband’s death in 1925, she supported herself and her sons with various jobs and maintained a staggering output of poems, plays, short stories, and newspaper columns. She also began hosting prominent figures of the Harlem Renaissance at her home, which she called the S Street Salon, providing a meeting place for such legendary artists and intellectuals as Langston Hughes, Jean Toomer, Alain Locke, and Eulalie Spence. She is recognized today as a prominent anti-lynching activist, a pioneering poet, and one of the first African American woman playwrights.