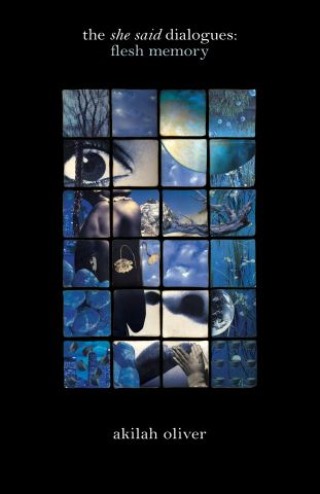 the she said dialogues

Akilah Oliver: Akilah Oliver was born in St. Louis and grew up in Los Angeles. She was the author of two books of poetry: A Toast in the House of Friends (2009) and the she said dialogues: flesh memory (1999), which received a PEN Beyond Margins award. Her chapbooks include A Collection of Objects (2010), a(A)ugust (2007), The Putterer’s Notebook (2006), and An Arriving Guard of Angels, Thusly Coming to Greet (2004). Oliver collaborated with a range of artists and musicians, such Tyler Burba, Anne Waldman, and Rasul Siddik; a notable performer, Oliver founded the feminist performance collective Sacred Naked Nature Girls in the 1990s. She was a member of the Belladonna* collaborative and a PhD candidate at the European Graduate School. Oliver lived for many years in Boulder, Colorado, where she taught at the Naropa Institute’s Jack Kerouac School of Disembodied Poetics. At the time of her death, she was a professor in the Humanities and Media Studies Department at the Pratt Institute in New York City. A memorial reading in honor of Oliver’s contributions to numerous poetry communities was held at the Poetry Project in June 2011. Akilah was the mother of Oluchi McDonald who predeceased her on March 13, 2003.